What is STEPN (GMT)? Here Are Some Tips to Get Started

Mobile non-fungible token (NFT) gaming app STEPN is powered by the Solana blockchain and features move-to-earn gameplay. Walking, running, or jogging outside in an NFT sneaker can earn users tokens through STEPN. With the support of the Web3, STEPN hopes to inspire millions of people to embrace healthier lifestyles while also contributing to the goal of carbon neutrality. What’s more, who was the brains behind STEPN’s conception?

STEPN was created by Australian fintech company Find Satoshi Lab. As co-founders of STEPN, Jerry Huang and Yawn Rong hail from Solana (SOL) (GMT). STEPN was victorious in the Solana Ignition Hackathon Gaming Track. Also, it’s the only mobile game to win the Hackathon’s grand prize. At the Hackathon, the judges lauded the game concept of STEPN as well as the app’s built-in market place, user-friendly UI, wallet, and overall mission to win over millions of non-crypto users.

A $5.0 million seed round was raised for the first Web3 running app (the first official money that STEPN raised). DeFi Alliance, MorningStar Ventures and Sequoia Capital are only few of the major investors in STEPN’s mission. STEPN’s goal is to inspire millions of people to live healthier lives by connecting them to Web3 and assisting to achieve carbon neutrality through the use of the funds.

How STEPN works; what the STEPN coin is used for; how you may acquire STEPN (GMT) and how to make money with STEPN by walking, jogging, or running outdoors will be explained in this post.

What is STEPN’s Function?

The STEPN app must be installed on the user’s device. Signing up for STEPN by email is the next step. After completing the verification process, STEPN cryptocurrency users must link their wallets. 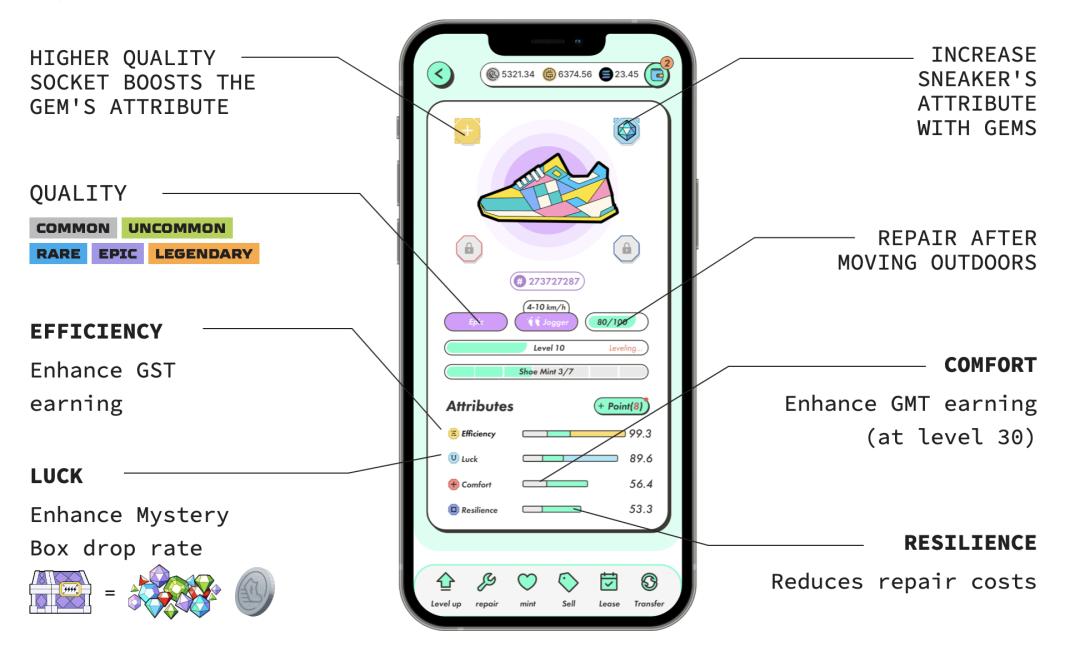 Users of STEPN’s Game-Fi system wear NFTs in the form of sneakers. The NFT sneakers must be purchased using Solana’s native SOL token, which must be deposited in STEPN’s in-app wallet, and users must wait 24 hours for their energy to be recharged. Energy is used to measure how long a user can exercise with a sneaker NFT.

User-selectable characteristics include robustness, efficiency, and ease of use. Your shoe’s energy cap is influenced by a variety of variables. Because the supply of rewards is limited, the energy constraint has a considerable impact on bottlenecking distribution.

One of the two tokens in the STEPN ecosystem is the game’s utility token, Green Satoshi Token (GST), and the other is the governance token, Green Metaverse Token (GMT). In all, how many STEPN (GMT) coins have been created so far? Six billion GMT tokens are available for purchase.

NFT sneakers, gems, and badges can be sold, rented, or traded in the marketplace, and players can earn game currency by jogging, walking, or running outside. Filtering and sorting are simple to use on the marketplace.

It is possible to begin running and reaping the benefits of GST utility tokens once your sneakers are ready (rewards are distributed of the 30 percent of the supply that is set aside for this purpose). It is important to keep in mind, however, that STEPN has yet to implement its rental and credit systems.

What Makes STEPN Stand Out?

The Social-Fi and Game-Fi aspects of the STEPN move-to-earn crypto software are both present. As part of STEPN’s Game-Fi effort, Game-Fi encourages users to battle climate change and live a healthy lifestyle while relying on its Social-Fi component for a robust infrastructure that stimulates user-generated content on the Web3 platform.

By walking, jogging, or running in NFT sneakers, users can earn GST. GST is a virtual currency that may be exchanged for in-game items and even fresh kicks. Players can rent or sell their NFT sneakers on the in-app marketplace, and their GST earnings are saved in the in-app wallet, which has an integrated swap option.

STEPN’s utility and fundraising requirements are met by this dual-token economy architecture. Creating tokens is the primary purpose of avoiding regulatory issues and dividing the project’s ecosystem into two tokens.

Because of the limited supply of tokens, STEPN also has a unique burn mechanism to encourage healthy living among its users. Both the GMT and GST tokens are burned through various in-app operations in order to diminish their supply.

What is the Purpose of the STEPN Tokens (GMT)?

The STEPN ecosystem has two tokens, as previously mentioned. In the next sections, we’ll go over some of the many applications for GST and GMT tokens.

If you participate in the Token Generation Event (TGE), then you can get your hands on GST tokens. Token creation events occur when a DApp developer formally releases the network’s individual tokens into the market.

Running, walking, and jogging are just some of the activities that may be performed with this utility token, which does not necessitate any additional investment.

The GST token can also be used to level up or repair footwear. Also, the GST token, which is used to exchange/swap USD coins, may be used to enhance gem items and mint shoes (USDC).

By using a governance token (GMT), you can modify the name of your footwear or go up the ranks. GMT tokens can also be used to provide premium game content, high-level activities, and profits.

As a reminder, only sneakers who have reached Level 30 are eligible to trade GMT for USDC. Nevertheless, to begin earning GMT, you must have at least three Energy, which is known as the “rule of three”.

The Way to Buy STEPN (GMT)

It is possible to earn GST tokens offline and free of charge if users have at least one pair of sneakers in their possession. As long as the STEPN app isn’t running, the mobile device’s health data is used to track the number of steps taken.

Find an exchange that accepts the GMT token in order to buy STEPN. If you want to buy STEPN, you can do so on Binance but not on Coinbase because Binance allows it. In order to purchase STEPN on the Binance exchange, please follow the steps outlined below.

Is it Wise to Put Money into STEPN (GMT)?

Investing in a cryptocurrency project is all on what you want to get out of it. If you aren’t sure what a protocol’s vision is, you should thoroughly research the market before making an investment.

According on your knowledge of this app, its team, and your financial goals; STEPN is either a good or bad investment. Also, if the app’s vision aligns with your own, it may be a fantastic investment opportunity. But if the answer is no, you should think twice about putting your hard-earned money into something you don’t believe in.