Mike McGlone warned that the Federal Reserve must act on inflation as German PPI data showed that inflation is at its highest level since records began in the 1940s.

Bitcoin (BTC) opened the Wall Street trading day on March 21 with prices soaring to more than $41,500, with gains continuing at the end of last week.

According to TradingView, BTC/USD rose $500 after the Wall Street stock market opened with a strong start to its best one-week close in four weeks, but the progress was short-lived. 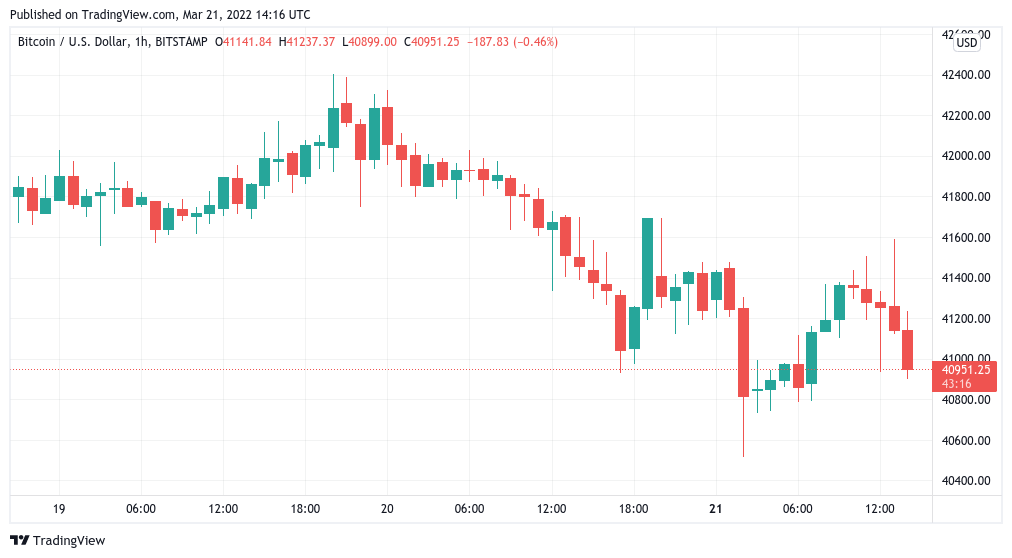 The largest cryptocurrency in an active stock market showed mixed signs in the shortest of times, as traders wait to see how long the current trajectory can be sustained.

For popular trader Crypto Ed, the area around $41,500 is crucial as a potential pivot point – a rally and continuation could happen, providing opportunities for the bulls, but a rout would mean a trip below $40,000 support.

In his latest YouTube update, he identifies $37,000 as a potential bearish target.

Meanwhile, Mike McGlone, senior commodities strategist at Bloomberg Intelligence, had some worrisome news for those hoping the stock market recovery will last longer when it comes to the broader macro outlook.

“So we have the longest relative stock market in 20 years . in terms of GDP, the most expensive stock market in human history, compared to real estate and global stocks,” he said Monday in an interview on The Wolf of Wall Street podcast .” Part of the reason is that this has been driving inflation, and the Fed has to curb inflation.”

“So, to me, that’s the key puzzle for this year; if it doesn’t get filled – i.e., the stock market is down about a third – then that’s going to be a problem.“

As a result, people are already betting on a significant stock market pullback, and Bitcoin’s positive correlation makes Hodler’s loss a major liability.

McGlone went on to note that Federal Reserve Chairman Jerome Powell hinted at the possibility of more aggressive rate hikes to curb inflation at further meetings of the Federal Open Market Committee.