Ripple Price Prediction: No, XRP Is Not a Security

Global stock markets have fallen in the face of negative inflation data, while Ripple continues to fight a nearly two-year-long legal battle with the Securities and Exchange Commission in the US, something which conspires to keep XRP price suppressed.

Nonetheless, hope for a long-awaited end to this legal case has increased in the past 24 hours, after the presiding US court approved joint scheduling proposals concerning the redaction of parts of key SEC documents.

When combined with other positive developments and rulings for Ripple over the past year, this suggests that a positive end to this legal tussle may be near, and that XRP could explode as a result.

Ripple Barely Budges After the Judgment of Judge Torres

The latest judgment in the Ripple-SEC case has come from Judge Torres, who has delivered several other rulings viewed favorably by people in the Ripple camp in previous months. In this particular instance, she simply approved a plan that had been jointly agreed by Ripple and the SEC, setting out a schedule for summary judgments on key parts of the case.

According to the tweet from attorney James K. Filan, this schedule runs from now to the end of December. This likely means that the case will not end until the beginning of 2023 at the very earliest.

However, crypto-specialist lawyer Jeremy Hogan expressed approval at the fact this plan will speed up the resolution of the case, given that it sets a clear timeline for the delivery important documents and decisions. It shows that both parties now want to bring things to a head, with Judge Torres agreeing with their wishes.

But while this is a positive development in the legal saga, it hasn’t really had a tangible effect on the price of XRP. The latter is still down across most timeframes, and also remains 70% down in the past 12 months. 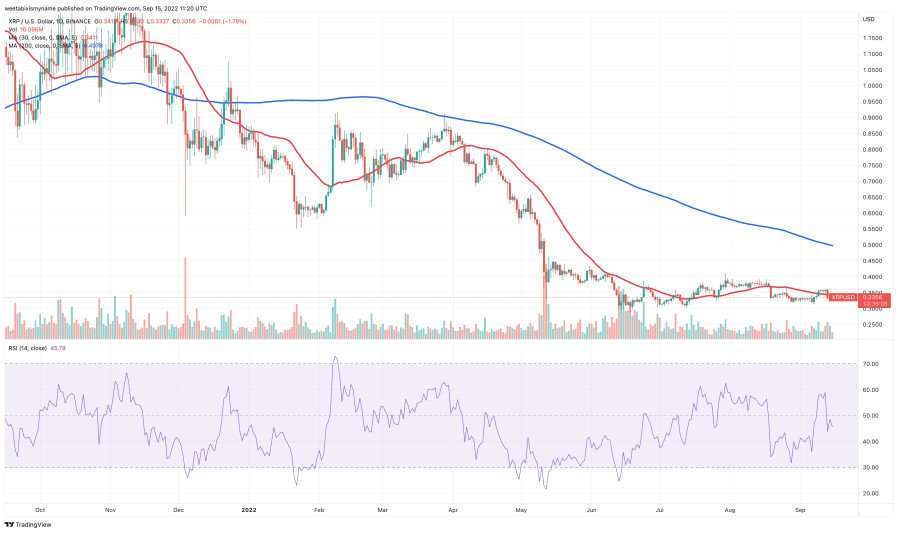 Despite the lack of movement, XRP’s chart shows it hit a bottom some time ago and is now simply biding its time until another rally. Its RSI has been below 40 for much of the past week, while its 30-day moving average remains far below its 200-day.

Of course, XRP needs to wait for the overall economic picture to improve before any real gains can happen. But when such improvements do occur, and when the case is finally resolved, its supporters are expecting it to post some fairly eye-watering returns.

Will XRP Win the Lawsuit?

The big question is whether Ripple will actually secure a positive judgment when the time for a final ruling comes. This is ultimately for the courts to decide, yet previous developments in the case suggest that Ripple has good prospects.

In January of this year, Ripple won the right to access important emails from 2018, concerning a speech delivered by the SEC’s William Hinman in which he declared that neither ETH nor BTC was a security. It then secured another favorable judgment in April, in which the court denied the SEC’s right to withhold some of the aforementioned important emails.

On top of this, various legal experts have gone on record to say they expect a settlement – rather than a ruling against Ripple – to be the likeliest outcome. This is in addition to positive statements from more crypto-sympathetic lawyers, as well as from Ripple’s own executives.

The future therefore looks bright for Ripple, with the company actually planning to list publicly following the case’s close. Together with the ending of regulatory pressure, and with the relisting of XRP on exchanges such as Coinbase, this could result in the altcoin’s price surging dramatically.

In this regard, it’s worth remembering that XRP is one of the few major cryptocurrencies that didn’t hit a new record high in 2021, and it still has an ATH dating back to 2018. So, at the very least, the market can expect XRP to bounce back to this ATH – $3.40 – if Ripple gets what it wants.