The growth of the NFT market during 2021 was exponential, with more investors than ever capitalizing on the trend of owning digital art. This trend shows no signs of stopping in 2022, with an abundance of exciting NFTs growing in value and proving themselves to be beneficial assets to own.

With that in mind, this guide will discuss the best NFTs to buy in detail, reviewing the top digital assets on the market right now.

Presented below is a quick overview of the best NFTs to invest in this year. Each of these NFT projects will be reviewed in the following section.

The projects listed above represent the best NFTs to buy, thanks to their mainstream appeal and potential for value increases. Let’s dive in and explore each of these NFTs individually so that you can gain a deeper understanding of why they are so popular in the NFT marketplace.

Axie Infinity, a popular blockchain-based game developed by the Vietnamese studio Sky Mavis, has always ranked on top of the NFT industry, so has this year. It is one of the key players driving the Play-to-Earn NFT concept to the generalization in the blockchain space, and is notable for its in-game economy.

In other words, Axie Infinity differs from most other NFT projects by focusing solely on how players complete game tasks and breed Axies.

Axies refer to the charming creatures that players may employ to combat against each other or to keep trading to earn more tokens. Entry requirement to participate in the game is to purchase at least 3 Axies.

The prices of Axies increase as the platform grows in popularity. Axies are valued differently depending on their attributes, but you can still pick a decent one for roughly $200 today. 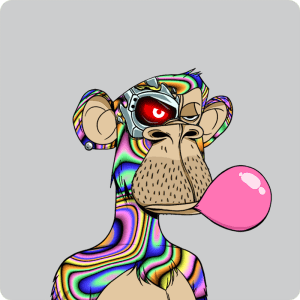 Bored Ape Yacht Club (BAYC) is an NFT project by Yuga Labs. It features a collection of unique NFT 10,000-pixel avatars hosted on the Ethereum blockchain.

BAYC is one of the most sought-after NFTs collections because of its uniqueness — no two NFT characters are alike with the same design, making each NFT in the BAYC collection extremely valuable.

Despite being a relatively young project debuted in April of 2021, BAYC is considered top competition with numerous well-known NFTs projects that have been released earlier. It has been ranked third after CryptoPunks by Decrypt on a list of the most popular NFT project.

Given its current standing as one of the top NFT projects, there’s no surprise that Bored Ape Yacht Club will be in our list of worthwhile NFT project investments in 2022. 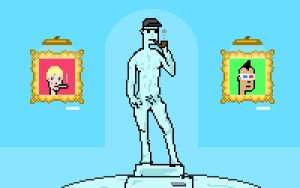 CryptoPunks was initially launched in 2017 by Larva Labs as Ethereum’s first non-fungible token initiative. It is one of the trendiest NFT projects that can’t be missed in 2022, which contains 10,000 unique pixelated punk-themed characters created via an algorithm.

There are total twelve types CryptoPunks. Human Punks are the most prevalent, but other rare Punk species exist as well: Alien Punks (9), Ape Punks (24), and Zombie Punks (88).

Alien Punks are the most valued of the collection and have been sold for more than $8 million at an auction. The highest-value NFT of the CryptoPunk collection was sold at a whooping 124,457 ETH (equivalent to 532 million USD). That’s why CryptoPunk is considered the most expensive NFT project in existence. 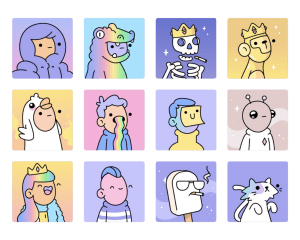 Doodles is one of the greatest non-traded funds to invest in right now if you’re looking for long-term growth. Initially launched in October 2021 and sold out almost immediately, the Doodles collection has swept the NFT market since then.

Doodles is a community-driven NFT project features 10,000 different NFTs with a unique mix of traits and aesthetics. Each NFT in the collection is a hand-drawn colorful doodle covering anything from pickles, animal, skeletons, spacemen, aliens, mascots to human-like figures.

What distinguishes the Doodles NFT initiative from others is that it runs on decentralized governance, which means that possessing a Doodle entitles you to vote on important features, future products and events.

There is no apparent reason why this NFT collection has garnered so much attention. However, the developers believe it could be due to the accessible nature of the art and the fact that the developers have prior experience within the NFT space.

Considered as the best animated NFT, the Invisible Friends NFT project is an amazing collection of top NFTs developed on the Ethereum blockchain that is inspired by GIFs. It went live in February of 2022 and has already gained a massive following of Discord (250k+ members) and Twitter (373k followers).

This collection is one of the best NFT tokens from a technical perspective. Each piece of art features an invisible character decked out in style, walking in place on a loop. While that might seem simple, creating life-like movement for 5,000 different characters is incredibly difficult. Each character has to move fluidly without going anywhere, and many of them are also balancing objects in their hands or on their heads. Such a success is thanks to the vision and creativity of creator Markus Magnusson.

The Invisible Friends collection is already entirely sold out, but you can still buy and sell these NFTs on OpenSea. Most Invisible Friends are currently selling for 6-7 ETH, or around $20,000. Also, the project has a road map that’s expected to lead to new characters and new abilities, such as being able to wrap NFTs into 3D versions. One of the most interesting NFT projects to invest in is virtual reality or metaverse land.

An example of a metaverse land project is the Decentraland. It is one of the most comprehensive virtual reality ecosystems where you can purchase and sell virtual space. Decentraland was founded in 2015 by Argentinians Ari Meilich and Esteban Ordano. When it launched in 2017, digital land plots cost around $20, while Mana tokens cost $0.02. Imagine its growth over a short period.

This platform also allows you to monetize your land by developing it, and some investors have done so by building NFT museums, amusement parks, and casinos. Others merely purchase virtual reality land as a speculative investment to sell it later for a higher price. 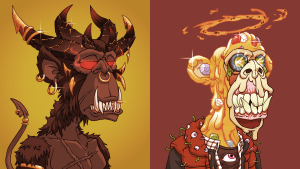 The Mutant Apes were distributed via airdrop to members of the Bored Ape Yacht Club. By owning any of Yuga Labs’ 30,000 apes (both bored and mutant), you’ll gain early access to Adidas’ “Into the Metaverse” NFT project, which now sells for more than three times its retail price.

It pays to be part of this project, and investors are projecting the minimum price for an MYC to be around 25 ETH in the future. 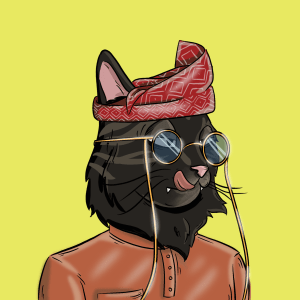 Rich Cats Nation is a collection that features 1,000 NFTs hosted on the Binance blockchain. The project offers ownership of one-of-a-kind digital art of cat-based figures with a variety of random unique characteristics.

Following the same structure as previous popular NFT collections, some Rich Cats are deemed rarer than others, resulting in higher secondary market valuations.

Owning a Rich Cat NFT also qualifies you to join Rich Cat Nation, an exclusive club with a variety of privileges. Royalties, NFT Airdrops, in-person events, Rich Cat clothing, and more are among the perks. Women Rise NFT project was created by Maliha Abidi,  a world-renowned Pakistani-American visual artist and published author. The project aims to bring further inclusion and diversity to the NFT industry by introducing more women characters as well as donating a percentage of primary sales to funds that focus on gender equality, girls’ education, and mental health in marginalized societies.

In an effort to accomplish this goal, Women Rise features 10,000 unique, computer-generated pieces of digital art, all of which depict women. The women in the works are activists, scientists, coders and other professionals of different nationalities and backgrounds.

Hence, Women Rise is definitely also one of the best NFTs to buy in 2022.

To summarise, this guide has discussed the best NFTs to buy this year. These 9 popular NFT projects have quickly attracted public attention and offer a lot of promise for digital art collectors.

As we always say, every investment and trading move involves risk. We recommend doing your own research (DYOR) before investing in any NFT project. There are also various other crypto-related articles on our page, you can check them out too.