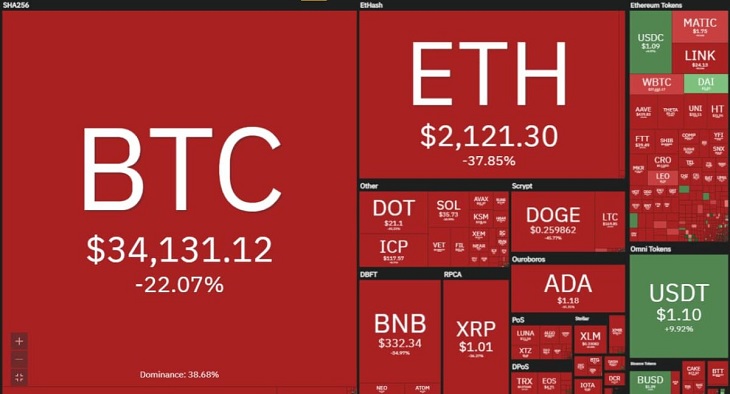 Looking for the reason the cryptocurrency market “bleeded” – Bitcoin dropped to $ 30,000

For those who have experience in the cryptocurrency market, the 30-40% a day “roller coaster” phase is a very unique specialty of crypto. As for those new to the market, May 19 will probably be an unforgettable “first time”.

In the face of intense selling pressure from the morning, Bitcoin failed to hold the $40,000 support and began a rapid free fall below the 200-day moving average (MA).

Notably, the most liquid stablecoin in the market, Tether, has also been hit hard during this price storm. USDT dropped to as low as $0.84 amid the “blood red” market.

The fact that the price “withdrawn” so quickly as today also made the traders who bet on rumors could not react, causing a wave of local panic in the market. Between 6pm and 7pm (Vietnam time), up to $4.3 billion of assets were liquidated on major exchanges, notably, the total amount of liquidation in the past 24 hours was only 8, 5 billion USD.

Let’s find out why the market “collapsed”

The new day started in the red as news that spooked the market came from China. Three Chinese financial associations have banned all financial institutions and payment companies from providing services related to cryptocurrency trading, and warned the public about cryptocurrency speculation.

This news comes just a week after Elon Musk suddenly announced that Tesla would stop accepting cryptocurrency payments on May 13. The Tesla bomb caused a backlash from the community, a series of names. Famous people got involved, as explained in the article In the crypto market, who to trust but not to Elon Musk!

There are also fuds from Binance being investigated by US authorities, or Vitalik Buterin’s classic Shiba “discharge” phase, plus the fact that Bitcoin has increased continuously in recent times and is correcting in the past. Short-term. It all created a negative and downright oppressive atmosphere, and May 19 came as an inevitable consequence.

A Great Alternative to Phemex to Trade Cryptocurrency Futures

Will Hong Kong only allow “professional investors” to trade in cryptocurrencies?