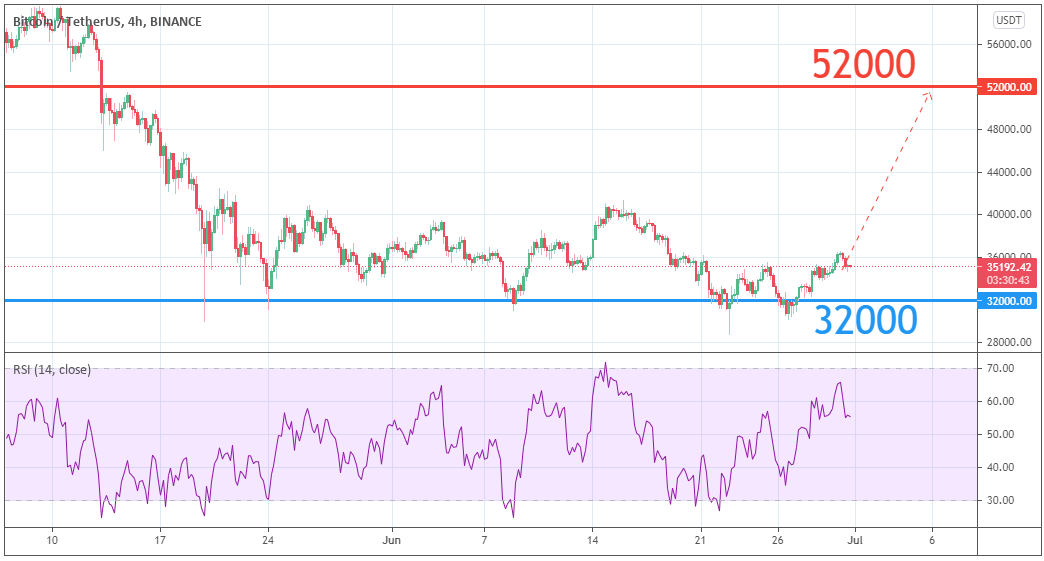 The price of Bitcoin keeps moving upward and stands above $35k while Gold slumped to test $1,750 yesterday. SP500 and Nasdaq indices have soared to the new time high as the customer confidence index shows the positive economic recovery of the United States. It’s notable that Bitcoin price hikes along with the risk-on assets instead of being dumped like Gold. The world’s economy seems to recovery from the Covid-19 pendemic after all.

Ether investment products have suffered record outflows this past week, while Bitcoin flows have begun to stabilize, according to the CoinShares’ “Digital Asset Fund Flows Weekly” report. Additionally, Cathie Wood’s Ark Invest teams up with 21Shares to file for Bitcoin ETF. Therefore, Bitcoin is likely to perform better than ETH in the short term as the appetite shifting among the institutional investors has given us hints.

Although Bitcoin has been suffered from any regulatory crackdown in either China or India recently, it doesn’t stop people’s appetite from purchasing Bitcoin. According to the data blockchain analytics firm Chanalysis, despite India’s uncertain regulatory climate regarding crypto assets, nationwide investments in digital assets have increased by roughly 19,900% over the past year. Additionally, China’s former crackdown on digital assets cannot harm Bitcoin’s value going up either. Therefore, the path seems quite clear for the investors.

The latest push for Bitcoin price to keep hiking would be the news that El Salvador to airdrop $30 in Bitcoin to every adult citizen. As long as its adult citizen downloads the government’s Bitcoin wallet app will be eligible for an airdrop of $30 worth of BTC. To do so, El Salvador’s government will need to purchase the required BTC it intends to distribute, adding more than $100 million in buying pressure on markets.           Therefore, Bitcoin price could rise in the foreseeable future.

Bitcoin has survived the latest China’s crackdown. The price of Bitcoin performs steadily, trading above the $30k level as the Fed chairman once again claim the interest rate will not hike in the short term. It is clear to observe that the risk-on assets start to rise again. Therefore, under the quantitive easing environment, Bitcoin sees in a “spring” stage.

Although the price of Bitcoin fell below $30,000 for the first time since January after China’s latest crackdown, Bitcoin rebounded back above $30k quickly. The crypto market has been suffering from a sequence of harmful sources since early May. The overall cryptocurrency market cap now stands at $1.303 trillion, and Bitcoin’s dominance rate is 47.1%. Bitcoin could be experiencing the consolidation process waiting for the next bull run.

Bitcoin fell as low as $31,184, a two-week trough yesterday. It was last down 10.7%, the largest daily percentage loss in a month. Furthermore, Bitcoin has lost more than 20% in the last six days already. The bearish sentiment is extremely increasing by China’s latest restriction. According to the news, China’s central bank recently summoned banks and payment firms, including China Construction Bank and Alipay, urging them to crack down on cryptocurrency trading. It might be seen that more investors escape the crypto market in the next few days. Therefore, keeping the short position seems very appropriate.

BTC/USDT swiftly dropped below $34,000 on Monday after the Agricultural Bank of China warned on crypto. This third-largest bank of China claims not to allow its services for transactions related to Bitcoin or cryptocurrency. Those restrictions on cryptocurrency are becoming the source of headaches for bulls. On the other hand, the low volumes show investors aren’t interested in protecting price action much above $30,000. Therefore, retest the support around $31000 is likely to occur.

The price of Bitcoin keeps retreating close to the 37k level as impacted by the FED’s new plan to hike the interest rate earlier in 2023. However, unlike the Gold price sees a massive pullback, Bitcoin price movement performs a higher lows pattern. It seems like Bitcoin plays a better role in terms of hedging heaven. Therefore, bullish sentiment remains solid with Bitcoin, and a further hike in Bitcoin is expected.

Stock markets and Bitcoin price took a slight hit after the Federal Reserve announced plans to increase interest rates twice in 2023, a tad bit earlier than markets expected. However, Bitcoin price pullback doesn’t like the stock market or Gold; it keeps the uptrend pattern solid and clear. From a technical point of view, Bitcoin performs a better bullish sentiment.

The price of Bitcoin has been hovering around $40k during the past three days. As the latest US central bank’s policy statement, due to be released with fresh economic projections at 2 p.m. EDT (1800 GMT), is expected to err on the side of continuing the Fed’s support for the economy until more workers are back on the job. However, the FED will not conduct any actual action in a short time. Bitcoin remains bullish as usual.

Bitcoin price hovering around $40k during the last two days. The newest tweets from Elon Musk that once Bitcoin mining uses more than 50% renewable energy, then Tesla will accept bitcoin as payment again has helped Bitcoin stand steady above $40k. Furthermore, Bitcoin price moves consolidated after the 50% crash; it is believed that an early stage of the next bull run is coming.

Bitcoin price continues to swing above the $36k level after the CPI jump of 5% in May. Investors believe that the Federal Reserve will not interfere with the interest market in the short term, causing further depreciation in the US dollar. Therefore, Bitcoin is likely to benefit from an inflation hedging demand like Gold.

Trade BTC and ETH with up to 150x leverage

Bitcoin price had surged nearly 20% reached $37,666 from its recent low at $31k on the 8th of Jun. El Salvador became the first nation to approve Bitcoin as its legal tender plays a vital role in the rally. However, the upcoming US inflation data is crucial that could bring Bitcoin back to the uptrend track. Behold, Bitcoin’s bull run remains.

Bitcoin’s bull faces several beats by negative news lately. The price is trading below $34k at the time of writing. Some institutional investors claim that they have shited some of their portfolios into Gold by realizing the profit made by Bitcoin. It seems to be a difficult time for the bulls. However, what could it be worse than now if that’s all the negative news comes out to beat Bitcoin? Who knows whether the giant whale accumulating Bitcoin behind the scene.

The crypto market has tumbled along with BTC lately. Even the U.S. Treasury Secretary Janet Yellen likewise failed to lift the mood when she voiced support for higher inflation. However, According to a June 7 report from CoinShares, Bitcoin investment products saw record outflows of $141 billion this past week while Ether products reported inflows of $22 million. Therefore, as we remain bullish on the market, ETH should apply to the buying the dip strategy.

The two lead cryptocurrencies both are moving in the narrow triangle pattern. ETH has shown a stronger bullish movement as compared to BTC. ETH’s current price is around 8% to the nearest resistance level at $3k, while BTC is nearly 11% away from its newest resistance level at $40k. Both lead crypto assets are waiting for a significant breakout; ETH seems to gain more when the breakout occurs as it has more consolidated higher lows price movement.

A series of Elon Musk’s tweets have caused the Bitcoin price to slumped nearly 8% to around $36k. It was after the Bitcoin price tried to break through the $40k level. Therefore, Elon Musk took the blame for this pullback among the crypto communities. On the other hand, it could be an excellent opportunity to buy the dip for the bulls. As not most of the market anticipants believe that he can decide the fate of Bitcoin, he got the record of swinging thoughts on Bitcoin after all.

ETH price is waiting to break the 2.7k level at the time of writing. People are paying attention to the fact that institutional investors load up ETH more than BTC lately, according to  CoinShares’ June 1 Digital Asset Fund Flows Weekly report. Whether ETH is gearing up to flip Bitcoin has become a hot discussion even more. Therefore, follow where the money inflows to could be proper for fining our target. 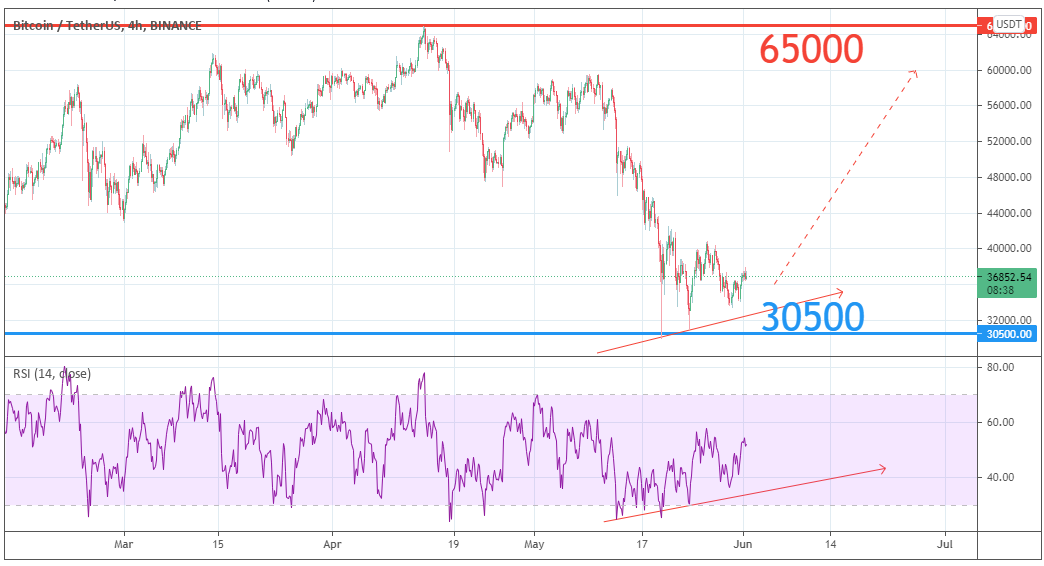 Bitcoin price struggles to get back above the $40k level since the 26th of May. However, a higher lows pattern has recorded the track of the movement during the past few days for Bitcoin. According to data from Glassnode, the STHs behind the sell-off, in contract, the LTHs that are in profit. Therefore, it seems the long-term holders(LTHs) will win as the short-term holders(STHs) have begun to release their loss during the downturn.

Try your luck and be the winner of 1 bitcoin and iPhone 13!