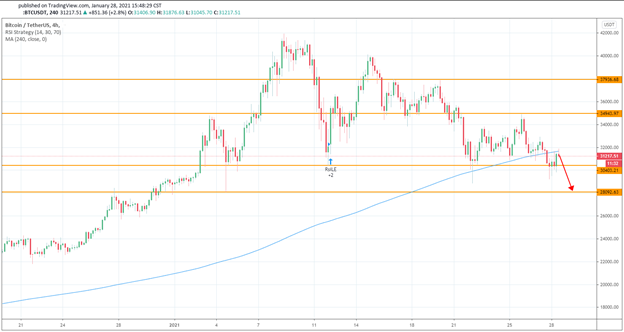 The price of Bitcoin failed to reclaim the territory above $35,000 despite a nearly 10% rally yesterday. According to the data released from Grayscale Trust, they have decreased their new Bitcoin purchase holding during the past 7 days. It shows that the institutional investors might wait until the price falls below $30,000. Therefore, a further correction may occur in the near future.

The bulls of Bitcoin seem struggling to maintain Bitcoin’s price above $30,000 the important psychological level lately as the resistance level of $32,000 remains strong. Furthermore, the price of Bitcoin is moving below the 240 moving average as can be seen in the 4H chart. The price movement looks favoring the bear and likely to move further down to test $30,000 the support level again. Therefore, we expected to go short when Bitcoin’s price moves below $32,000 in the short term, and vice versa.

The price of Bitcoin keeps swinging below $33,000 with low volatility yesterday. It worries the bullish investors as the market is getting less excited and the price seems to be going down. Furthermore, Biden’s $1.9 trillion Covid relief plan is in trouble and could pull the fuel out of the crypto market. Therefore, further consolidation is expected for Bitcoin’s price in the near future.

Bitcoin’s price failed to break the $35,000 mark the psychological barrier yesterday. Along with other risk-on fiat currencies, Bitcoin is worrying over Democrats might not be able to pass the next round of stimulus until March. The US dollar as the main counterparty has risen nearly 2% from the low at the beginning of the year. Therefore, Bitcoin may see a further correction until the stimulus passes.

Ever since Bitcoin’s price experienced a desperate dip to $28,842 last weekend, it has found an important psychological support level of around $30,000. The price of Bitcoin has been consolidated after a rapid rally from the recent low. It is expected that the market is back to a bullish optimism. Therefore, buy Bitcoin in the range between $29,000- $32,000 is recommended.

Bitcoin’s price has dropped below $35,000, the psychological support level, and kept sliding in price during the past few days as it faces the profit-taking sell-off pressure from institutional investors. However, according to data from Glassnode, “liquid” Bitcoin wallets have shed 270,000 BTC over the past month, up from 175,000 Bitcoin at the start of January. Therefore, Bitcoin still remains bullish in the long term but consolidation in the coming trading days.

Bitcoin’s price slid from $37,888, yesterday high when Janet Yellen’s critical comments about cryptocurrencies during a hearing with the Senate Finance Committee. It shows that the cryptocurrency market is significantly being influenced by the politician as institutional funds dominate the market. However, the market seems healthy and still on the bull run as no actual restrict act is being issued yet. Therefore, Bitcoin remains bullish in the long term yet a correction is expected in the near future.

As the correlation between Bitcoin and the traditional financial market increases, a gradual increase in the US bond yield causes great selling pressure on the price of Bitcoin. However, with Biden’s 1.9 trillion stimulus plan coming, Bitcoin as a hedging tool to the inflation is expected to remain bullish. Thus, a further correction could be a good chance to accumulate Bitcoin.

Bitcoin’s price recovered by 27% just three days after testing the $31,000 support and earlier today bull recaptured the $40,000 level. With the price of Bitcoin gone higher, Bitcoin itself becomes unaffordable to the public investor. The major participants in the market have changed from public individuals into financial institutional investors. According to Grayscale’s data, there was more than 93% invested by the financial firms to the crypto market in Q4 2020. Therefore, we expected Bitcoin will be pushed to a higher level as more traditional financial firms are showing more interested in cryptocurrency investment.

Bitcoin reclaims its territory above $38,000 after a great dip reached $30,366 on the 11th of Jan. Grayscale Trust’s reopen to new investors is considered as one of the main reasons causing this rally. They bought 2172.39 BTC which is a 0.36% increased in their total holding yesterday. It is expected that Grayscale Trust will once again become another bullish force to the BTC market.

Bitcoin remains a strong bullish sentiment as the top 100 richest addresses kept accumulating more than 350,000 BTC in the last 30 days according to the on-chain data. Furthermore, it has found a consolidated support level at $33,000 as can be seen in the 1H chart above. It is expected that the next bull run is coming as the Big Whale doesn’t seem to decrease their Bitcoin holding.

Bitcoin seems survived the impact of rising yield in the US Bond markets lately after dropped 20% in price yesterday. As can be seen in the 4H chart, the price of Bitcoin found a strong support level above $30,000 and the rally triggered rapidly after reached $30,366 according to BTCC’s quotes. Therefore, we expected the Bitcoin price dropped to $30K was ‘healthy and necessary”.

Bitcoin dropped more than 20% today, as the heightened selling pressure from miners. According to the data monitor, some miners appear to be selling large amounts of Bitcoin when the price is over $41,000. However, those major institutional investors still support the long-term bullish sentiment despite Bitcoin’s price has dropped out of the ascending trendline into a bearish trend in the 1H chart. Therefore, we expect the bull run would not be ended by the price of $42,000 yet. The price of BTC might strongly rebound in the next few days.

The price of Bitcoin hit the all-time at $40,349 along with the US major indices made the record high yesterday. As the investors focus on the greater stimulus coming up from Biden’s government, it helps to push Bitcoin higher in price in order to hedge the inflation effect. However, be cautious a great correction may happen when the actual stimulus is near. Therefore, long Bitcoin before the expectation come to pass would be a proper trading strategy.

Ever since the great dip happened on the 4th of Jan, Bitcoin’s price breaks the new all-time high one day after another. This story tells us that the bulls bought the dip and produced enough momentum to send the BTC price to a new all-time high above $37,000. Therefore, buy more Bitcoin when it pullback in price still recommended in recent trading.

Bitcoin has hit the $35K milestone quicker than expected on the 5th of Jan and continued to rise in price after reached the all-time record high. This rally is considered triggered by the institutional investors and so-called “Giant buyer”. Bitcoin keeps attracting millions of dollars inflow into the market. However, there is potential profit-taking selling pressure coming from the institutional buyers is increased as the price of Bitcoin arisen too fast. Therefore, people should be cautious about whether big whales have changed their investment length in Bitcoin.

Bitcoin experienced a quick rally back to above the $30K level after more than a 15% dropped in price yesterday. It is expected that many high-leverage traders might be shaken out of the market during the dip. However, the dip provided a great opportunity for the giant investors who focus on a long-term investment in Bitcoin to collect cheaper Bitcoins in their portfolio. Furthermore, a significant support level of $28,000 is found as can be seen in the 4H chart. Therefore, grab any chance to buy Bitcoin when it pulls back in price could be a wise trading strategy.

The price of Bitcoin surpassed $30K at the beginning of the year as expected. Bitcoin’s price experiences a strong rally along with the major stock indices and even performed much better than the traditional financial markets. The giant investors are seeing Bitcoin as the new form of payment in the future, furthermore, in order to hedge the foreseeable inflation caused by the upcoming stimulus, Bitcoin has become their first choice. More conception and expectations have been added into the crypto market, the bulls will never get satisfied accepting more all the good news for Bitcoin.

Disclaimer: Our content is intended to be used and must be used for informational purposes only. It is very important to do your own analysis before making any investment based on your own personal circumstances. You should take independent financial advice from a professional in connection with, or independently research and verify, any information that you find on our Website and wish to rely upon, whether for the purpose of making an investment decision or otherwise.

Why Bitcoin Is Dropping, And What It Means