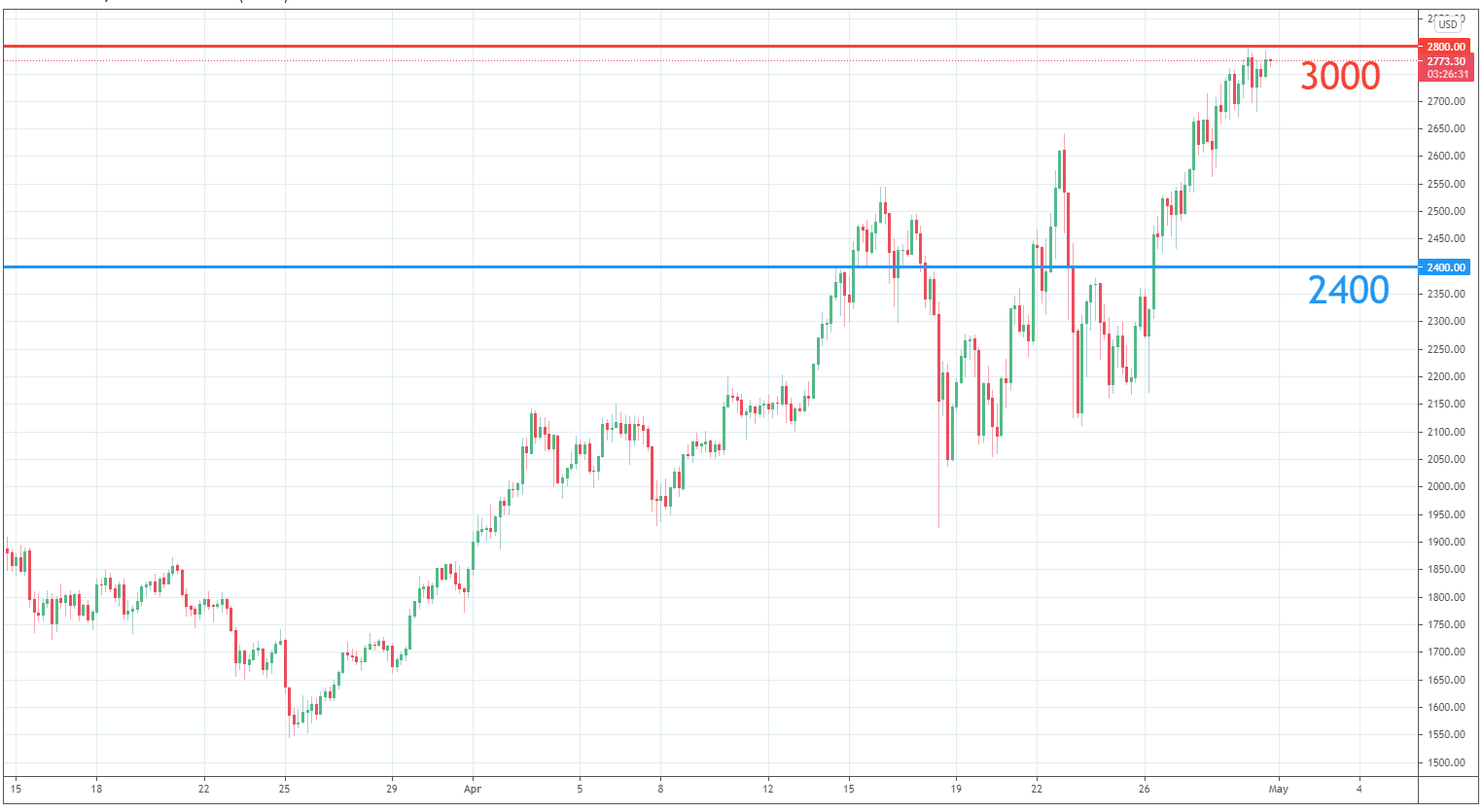 Bitcoin’s dominance keeps dropping while Ether continues to trade above $2,700. Ether to flip Bitcoin discussion has increased among the cryptocurrency participants. Furthermore, another inevitable issue is how long the bull runs last without Bitcoin’s lead. However, the good news is that more adoption by giant financial institutions could lead to a different story.

Ether’s price hit the all-time high at $2,760 while Bitcoin kept swinging around $55K yesterday. Bitcoin’s dominance over the total cryptocurrency cap has drooped to 49%, yet Ether increased to 12.57%. It seems Ether is leading the verge of the altcoin season to start. Therefore, Ether sees a higher price as the bull run just began.

Ether has a 15.7% gain in price over the past seven days, outperformed Bitcoin and hit the all-time at $2,718. The soar occurred after European Investment Bank’s $121M digital bond news. It’s another adoption case on Ethereum by the giant financial institution. Therefore, Ether will be fueled by the demand for a $121M digital bond issued, and the price goes up.

Bitcoin had soared more than 10% in price and closed at above the $54,000 level yesterday. Along with the major stock indices, the bulls celebrate the bright prospection ahead of the world for Bitcoin. The previous correction didn’t bother Bitcoin’s bull run anymore. As long as its price holds still above the $50K level, further breakout towards the all-time high at $64,850 is coming shortly.

The price of Bitcoin gets back above $52,500 after been consolidating below $50K during the last weekend. A further crisis of correction seems not to happen due to a strong rally when the price reached slightly below the $47,000 level. Therefore, if Bitcoin’s price holds still above $50K at the end of the day, we expect Bitcoin will get back to the bull run track.

The price of Bitcoin has retreated below the $50K territory after four days’ consolidation. It seems the bullish momentum is losing the strength since Bitcoin’s price reached its all-time high at $64,864 on the 14th of April. However, the correction is likely to end when the price goes $46,000 as it will achieve a 30% pullback from its all-time high. It is considered a healthy correction under a bullish market.

It is interesting to look at the market cap of BTC sliding when the price of Bitcoin moves sideways. The CoinMaeketCap data shows that the market cap of BTC peaked at the recent high at 61.19% of the total cryptocurrency on the 1st of April. It then started shrinking towards the recent low at around 51% at the time of writing. Some investors worry about whether it’s a bad omen for the bull trend. However, it could be a time for Bitcoin to consolidating and bottom-up the price. Since the total cryptocurrency market cap is still growing.

The price of Bitcoin might not face a further pullback risk in a short time as the daily candlestick shows a solid support level above $55K. Although Bitcoin dropped nearly 16% from an all-time high at $64,900 on the 14th of April, the daily closed price never has below $55K since then. Therefore, it is expected that a further pullback in Bitcoin’s price is not likely to occur.

The price of Bitcoin has been swinging between $53K-$58K the last two trading days. It is hard to anticipate whether there is a further correction coming. However, the daily candlestick over the previous two days shows that the $55K is a crucial support level for the short term. Therefore, the recent correction is highly possible to end if Bitcoin’s price holds above $55K.

It seems there is no correct answer to the recent dip in Bitcoin’s price that happened on the 18th of April. However, the drop helped us to discover the immense support level of around $51,000. The price of Bitcoin then rallied rapidly above $55,000 after the plumb. Bitcoin’s price is trading above $57,000 at the time of writing. Therefore, the market is still optimistic, and the bullish sentiment gets stronger after surviving from the dip.

Bitcoin dropped roughly 3% after the White House expanded sanctions in response to Russian cyberattacks. US president Biden seriously criticized Russia for using crypto to executive the sanctions at the conference. It caused investors to be worried about the possible strain from government supervision. Therefore, bitcoin’s price might retest support force between $60K to $61K on the weekend as the bullish sentiment has been affected.

According to the report, the major U.S. asset manager, Grayscale, has just surpassed $50 billion in cryptocurrency assets under management. The size of Grayscale is closer to the largest commodity ETF, which manages over $57 billion. Grayscale’s Bitcoin Trust has held over 650,000 BTC in total already. The growing cap shows institutional investors’ positive expectation for digital assets. Therefore, Bitcoin’s price is still on the bull run trace for the long term.

Bitcoin has surged to new record highs ahead of the major U.S. exchange Coinbase’s April 14 direct listing on the Nasdaq. This new sector draws the whole traditional security market’s attention and attracts more bulls to get into the crypto markets. Furthermore, the price of Bitcoin sustains above the $63,000 barrier, as can be seen in the 4H chart. Therefore, It is expected that Bitcoin’s bull run is ongoing, and $68,000 will be the next target price.

According to the news, the latest company to join the BTC market is TIME Magazine. The company has agreed to accept Bitcoin as a payment method and hold BTC on its balance sheet. Bitcoin adoption is surging, and there are more and more companies showing their interest in the crypto industry. Due to this reaction, the FOMO investors are driving the bullish trend. The bulls are ready to break through the last barrier, the all-time high at $61,874. Therefore, we expect it might hit $65000 in the next few days.

Bitcoin soared above the $61,000 overhead resistance on April 12 and reached $61,204, just short of the all-time high at $61,874. With the trend of the increased interest in the market coming from large institutions in the mainstream financial industry. The extreme institutions’ demand has recently been the main driver on the buyer side. Bitcoin could soon create a new all-time high as the institutional demand remains high. Touching $65k is possible to occur this week.

The BTC has found its key support level above $55K for the short term during the past week. Despite the price of Bitcoin swinging relatively quiet as compared to other altcoins, the bullish sentiment gets stronger as the tether deposits keep growing among the crypto exchanges. We expect that an increased deposit indicates more sidelined funds for buying Bitcoin, which is a bullish sign for the coming future.

The price of Bitcoin is moving sideways during the past week and is trading between $55K-60K. However, it seems to attract more bulls to get into the crypto markets as the overall cryptocurrency market cap now stands at $1.90 trillion and Bitcoin’s dominance rate is 55.6%. It will be a long-term bullish sign for the market including Bitcoin, the top cryptocurrency, as the market cap will grow all together.

The BTC is stuck inside a large range between $57,000 and $60,000 in recent days. However, the current pullback could find support at the 20-day EMA ($57,000), which has slowly started to turn up. Furthermore, the “fear and greed” indicator has continuously improved over the past five weeks. The optimistic sentiment on Bitcoin remains strong. Therefore, we expect if BTC rebounds off this level, the bulls might try to push the price above the overhead zone again.

The market cap of Bitcoin is roughly around $1.1 trillion as compared to the total market capitalization of gold at roughly $10.7 trillion. Bitcoin as the digital gold has reached nearly 10% in the total value of gold. The possibility of Bitcoin’s market capitalization surpasses gold has been argued among the analysts. We don’t know the future yet but it seems that Bitcoin is on the inevitable path to reach gold’s market cap.